In Moldova & Ukraine, SGA funded medical teams hold regular clinics in rural areas, providing free medical care and spectacles to the poor and vulnerable, who, otherwise, would not have access to such care. The teams also hold evangelistic meetings before the clinics and share the Gospel during those meetings.

We thank God for our staff, volunteers and partner churches who have been distributing shoebox gifts sent from the UK and sharing the good news of God’s greatest gift of His Son Jesus. We pray for all those who receive a shoebox to respond to the good news of the gospel.

We thank God for the faithfulness of Christians in Ukraine in sharing Christ’s love and for all those who volunteer with the Prison Ministry. We pray that coronavirus rates will drop and prison visiting will be able to resume.

May 2020
Sharing the gospel with children

International Aid Trust gives thanks for local churches such as God’s House at Klehivka, who reach out to, and support their local communities throughout the year, including after-school and holiday clubs for children. We pray for an end to the coronavirus lockdown before the summer so that holiday clubs and camps can happen and many children and young people can hear the gospel.

Please join us in giving thanks for all the pastors and volunteers involved in the Prison and Hospital Ministries in the Odessa region. Please pray that they will know God’s help and support as they seek to give hope in Jesus to people in hopeless situations. Please pray for those who are ill or imprisoned to know God’s love and comfort.

As the war in Ukraine continues, and deep marks are left in the spiritual lives of the people, Christian lawyers, law students and young professionals are gathering together to grow in the knowledge of God’s Word and stand together as they shine like stars for Jesus in their communities. Please pray for this group who came together for their first meeting in September to discuss theology of work. As they deepen their roots in Christ, pray that the message of hope through Him will pour out into the lives of people around them. (Lawyers Christian Fellowship)

Alison Giblett leads the Genesis ministry, which helps people receive God’s healing in areas where they have been wounded, freeing them to rely on him rather than on destructive habits. She also helps facilitate cross-cultural outreach for the Ukrainian Missionary Church union. She says from Kiev: “Please continue to pray for peace and reconciliation in all areas of society and an end to the war, which is continuing after more than three years. In particular, pray that Christians will effectively demonstrate Christ’s love and care to those in need. Already many families are suffering from post-traumatic stress syndrome.”

Polina is a student at a university in Kyiv (Kiev) where she leads a Bible study group. She writes: “In Ukraine some people are very religious and for them Christianity is all about rules and traditions. They think that if a church is not Orthodox, it is probably a sect. Our Ukrainian group of nine students (called CCX) only started in September 2016, so now we have become closer as friends and as a team. Pray for courage to share the gospel and for the university administration to be open to our group so we can get official permission. Pray for more non-Christians to come to our meetings, and that we can do a mission week in our university in the next academic year.

Separatists seized an evangelical church in eastern Ukraine in November amid reports of increasingly frequent attacks on Christians in the region. Armed separatists broke into a newly constructed church in Donetsk, driving out the Christians inside and forbidding them from holding any further services there. They threatened to kill anyone who disobeyed this order. The Donetsk and Luhansk regions of Ukraine are under the control of pro-Russian separatists. The Council of Evangelical Protestant Churches of Ukraine issued a statement reporting intense persecution of Christians citing 'abductions, beatings, torture, threats of execution, pogroms at the places of prayer meetings'. Please pray for protection.

A Ukrainian military chief’s life was spared, thanks to a well-timed gift of a pocket New Testament. The soldier received the New Testament on 20th February, at a prayer tent on the Maidan square in Kiev, which was set up by the Genesis ministry. "That day 77 people died," said Valery, who was working in the prayer tent. "Many who were with this soldier were killed, but he had put the small New Testament we gave him a few hours earlier in his left top pocket… During the fighting he was shot in the heart, but the sniper bullet got stuck in the New Testament, so the New Testament literally saved his life! He came back to us to give thanks and share his story." Pray for Christians throughout the country to bring light, peace and hope to Ukraine.

Recent events in the Crimea have caused a great sense of anxiety in people throughout the country. Alarming phrases are being used like "Europe's worst crisis since the Cold War". However, there are reports of a new unity of heart and action being demonstrated by Christian denominations. The defence minister has written to church leaders that "The voice of the Church is more important now than ever before." Believers from all denominations kneel in public squares to pray for the nation. And the Muslim Tatars have offered to open their mosques to Christians to host prayer gatherings. Pray for this new hunger for God and for His Word to produce a refined church, and many new believers.

Reports of violence, discussions of amnesty and government resignations have passed through international news sources since protests were sparked by the November announcement that Ukraine would not be strengthening ties with the EU. The international community and the church are worried that the country will descend into civil war if common ground cannot be found between the opposition parties and the current government. As protests continue, please pray for the work of BMS World Mission partner organisation, Russian Ministries, as they seek to spread the gospel and messages of peace and compromise in the hearts and minds of both sides.

Perhaps more than anywhere in the rest of Europe, God is reaping a tremendous harvest in Ukraine. Churches are growing fast and church planting is clearly on the agenda. Since independence, evangelical churches have nearly doubled, although there are restrictions, and the environment is not always easy. All forms of religion have experienced growth including the cults. However with increasing prosperity, exposure to European markets and improved work levels, the fascination of things spiritual is on the wane. Still, Christians have a passion to reach their own people and a determination seen in few European countries.

Organisations with connections in Ukraine 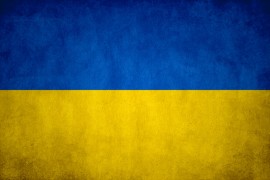